Greeting Jazz Fans! The fifth annual A2 Jazz Fest was cancelled due to the COVID19 pandemic. We were all feeling down about missing a year, but we have good news for 2021!

The A2 Jazz Fest, in a partnership with the Blue LLama Jazz Club and Mandolin.com, will be presenting two livestream concerts in January 2021.

Djangophonique with special guest Leila Shaye will perform on Saturday January 23rd and will offer an online meet & greet, Q&A before the show. Tickets are available here: https://boxoffice.mandolin.com/collections/djangophonique 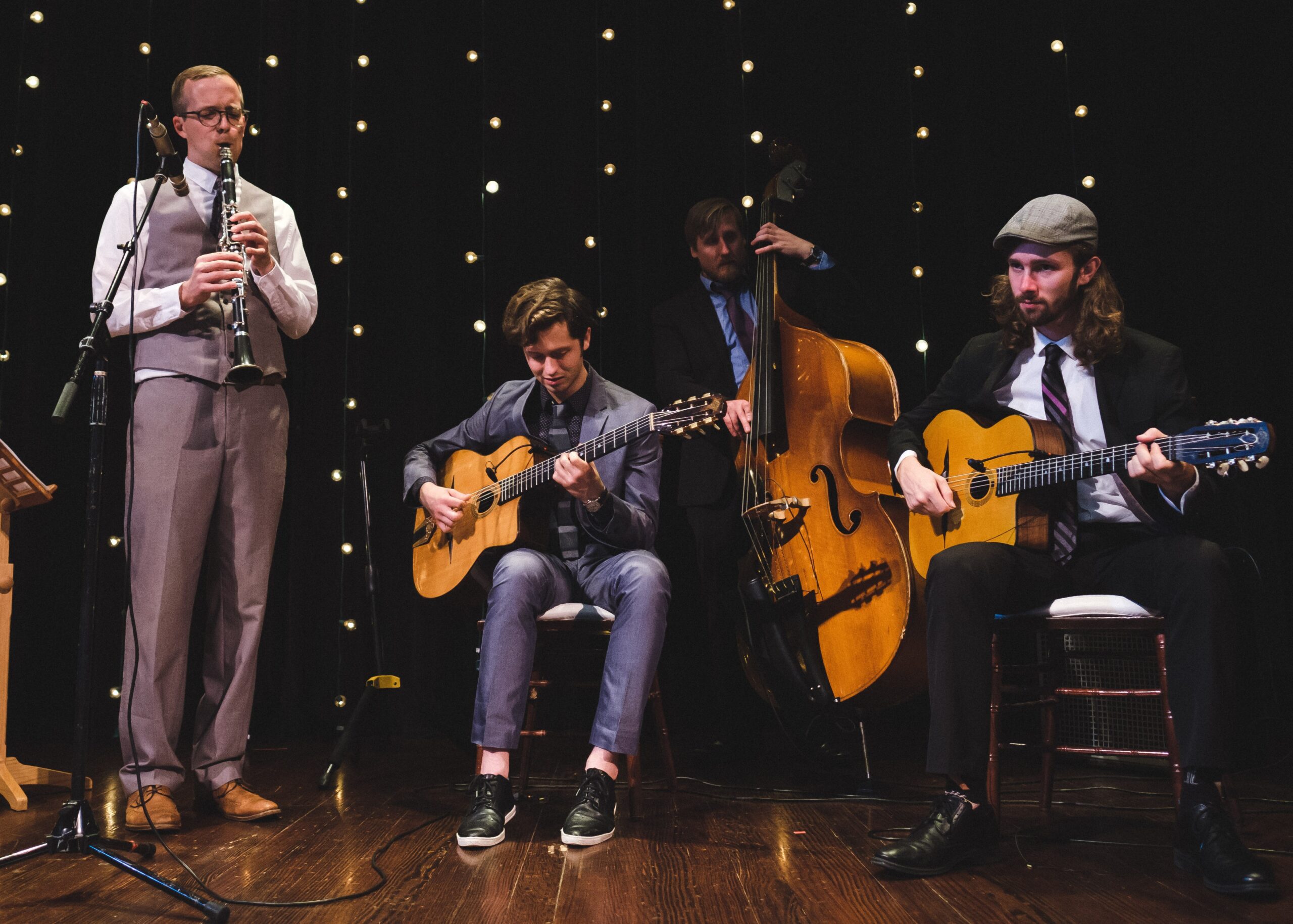 Djangophonique is a musical project born out of reverence for the Parisian Jazz Manouche style that was made popular by the legendary Sinti guitarist Django Reinhardt and his Quintette du Hot Club de France. While remaining steeped in the rich and virtuosic tradition, the group brings this music into the present with stunning improv, spontaneity and musical interaction. Hot swing, lush ballads, musette waltzes, jazz standards, boleros, and moody minor pieces are all fused together with theatrical flair and a sense of humor.

Born in a sandstone victorian farmhouse that has been in his family since it was built four generations ago, Andrew Brown is the son of a Motown session musician and grew up listening to the sounds of his dad’s piano as he steeped in musical influences from Duke Ellington to Stevie Wonder. As a young man returning from a trip to New Orleans with a newfound interest in Swing music, he co-founded the eclectic americana group Appleseed Collective, with whom he has toured 150+ dates a year. Traveling all over the continental United States, playing esteemed venues and festivals such as The Ark, Sisters Folk Festival, Wheatland, Cervantes Ballroom, Summercamp Music Festival, Schuba’s, and The Ann Arbor Folk Festival at Hill Auditorium, he cut his teeth as a guitarist, songwriter and band leader. Since slowing down his touring schedule in 2017 he began tirelessly practicing and performing the music of his favorite guitar player: Django Reinhardt. Since then he has studied at various music camps with many of the genres heavy hitting players such as Angelo Debarre, Sebastian Gineaux, and Gonzalo Bergara, and was even invited to back up Denis Chang at one of his concerts. Andrew currently plays throughout Michigan with his own project Djangophonique, his band Appleseed Collective, and his friends projects Third Coast Gypsy Jazz, Smoking Dandies. He also teaches guitar, both generally and specifically in the style of Django.

Diego Rivera and his Quartet will perform a CD release concert on Saturday January 30th and will offer an online meet & greet, Q&A session after the show. Tickets are available here:
https://boxoffice.mandolin.com/collections/diego-rivera-quartet 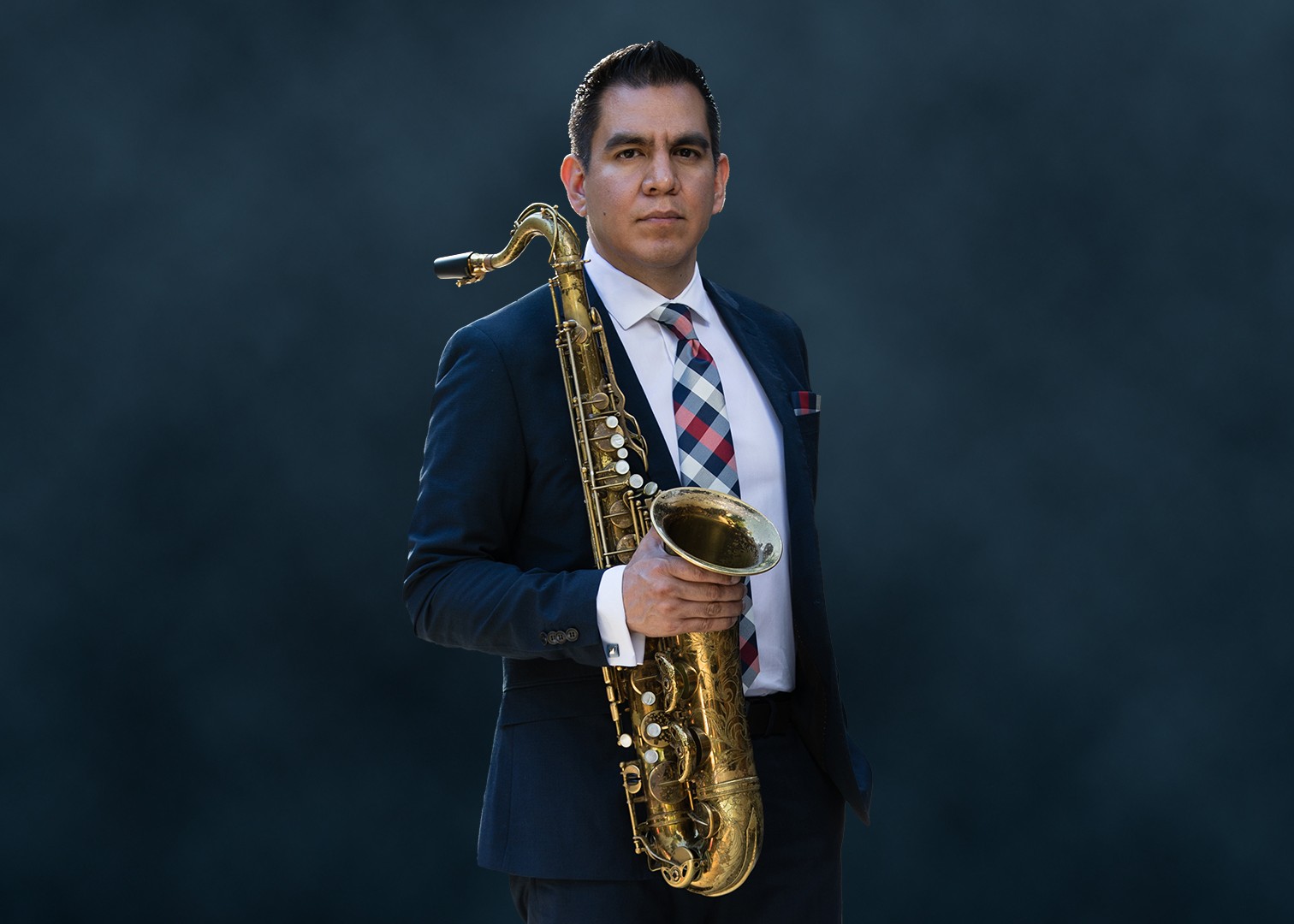 A world-class musician, composer, arranger and educator, Diego Rivera has entertained audiences for over 20 years. Rivera is known for his muscular tone and unique blend of straight-ahead mainstream jazz fused with music inspired by his Latino background and heritage. He is a tenured Associate Professor of Jazz Saxophone at Michigan State University where he also serves as Associate Director of Jazz Studies.

Rivera was born in Ann Arbor, MI and raised ‘just up the road’ in East Lansing, MI. Born into a Mexican-American family, his Chicano heritage has always been important to him and shaped his creative endeavors. His parents named him after the famed muralist, Diego Rivera. A trip to the Detroit Institute of Arts at a young age inspired him to make his own mark with the Saxophone rather than the brush. He attended Michigan State University where he studied with Andrew Speight, Branford Marsalis, Ron Blake and Rodney Whitaker.

In 1999, he began his professional and touring career with the Jimmy Dorsey Orchestra on their Big Band ‘99 tour. Since that maiden voyage, he has performed concerts at the most prestigious venues and festivals across the United States, Canada, Europe and Asia. He currently leads his own group, The Diego Rivera Quartet. Rivera has also toured extensively with JUNO-Award winning Canadian Jazz Vocalist, Sophie Milman and The Rodney Whitaker Quintet. He is a member of the The Ulysses Owens New Century Big Band (New York, NY), the Jazz @ Dr. Phillips Center Orchestra (Orlando, FL) and the Gathering Orchestra (Detroit, MI). He has also performed with artists: Ellis Marsalis, Kurt Elling, Christian McBride, Wycliffe Gordon, PRISM Saxophone Quartet, the Gerald Wilson Big Band and the Lincoln Center Afro-Latin Jazz Orchestra.

We are excited to share with you an event presented by the Blue LLama Jazz Club who provided...

All about Ann Arbor: Annual A2 Jazz Fest to take over Blue LLama Jazz Club in downtown Ann Arbor

Celebrating its fourth year, the A2 Jazz Fest was founded by Blue LLama Jazz Club artistic...

What to expect: Original compositions tapping into the gut bucket of Black American Music.